Home » Divine Blog » Do You Hear What I Hear?

Do You Hear What I Hear?

“Here are two twenty-fives,” Francisco said to me as we drove up to the toll booth.  “Is that what you need?”

I handed the money to the lady in the toll booth, got my receipt, and drove off.

We laughed when we realized we’d been saying the same thing.

Being married to someone for whom English is a second language can be interesting at times.  Communicating is fraught with possibly crazy-making (and sometimes delightfully funny) scenarios.   Like the time he told me I’d “washed his brain” (“brainwashed”). Or the time he said he was a “rullfuler.” HUH???  (I’ll tell you later what that one meant.)

There are many times when we are saying the same thing, but we aren’t getting it because we are so adamant that our view is the correct one.

Anybody relate to that?

I started to think about how this is such a great metaphor for not only communication in general, but for how we receive information from the Divine.

I can see the Divine telling me that it gave me the answer, but because I am thinking of a specific way in which I want my answer to look, I’m just not “getting” it.

For example, have you ever asked for something only to realize later that you got exactly what you asked for – just not the way you thought it “should be”?

When we first moved to Florida, I was very clear that I wanted a house with a pool.  It’s hot here and I love to swim.  Yet, we didn’t find a house we really liked that had a pool. 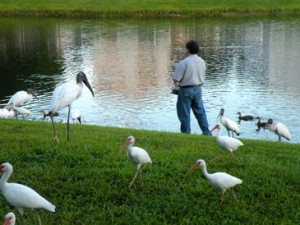 What we did find was a house that was on a lake.  And the moment I saw the back yard with that lake, I knew that this was the house I wanted to live in.  (I mean I could always put in a pool, but I can’t put in a lake!)

(Here’s a picture of Francisco feeding the ducks, the Ibis and (my favorites) the Woodstorks.)

A year and a half went by and I wistfully thought of the pool I wanted so much.  I wasn’t swimming, and I really missed it. 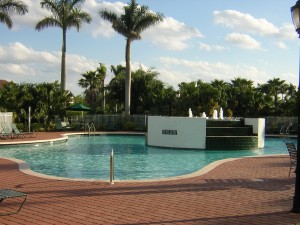 Then, one day, I decided to go to the community pool (about 3/10 mile from our house).  It doesn’t have lanes (it’s shaped rather like an elongated flower with rounded petals and a huge waterfall feature plunked in the middle), but it is large and I could swim.

Suddenly, I realized that I HAD gotten a house with a pool.  I just had to expand my vision of what “having a pool” looked like.

Because it’s there, I promise.  You just have to hear or see it!

(By the way, for those of you still pondering the “rullfuler” question?  He says he’s a “rule follower.”)

1.       Look into your life at what you have been asking from the Divine.

2.       Look to see how the Divine has already given you what you have been asking for.

a.       If it’s love, then look to see where you have love already expressed in your life.

b.       If it’s abundance, look to see how abundant you already are.  (By the way, this one is easy: imagine you are in another, much poorer country living your life there.  You’ll really get how abundant you truly are.)

d.      If it’s friendships, begin to count how many friends you have – online and off.  (You’ll be amazed at how many there are.)

e.      If it’s the ability to touch someone else’s life, notice how you are already doing this, just by being yourself.  Do not underestimate the power of a smile or a simple “Hi!”

3.       Write them down.  The more you notice, the clearer you are about your own ability to receive answers to your prayers, to co-create with the Divine that which you desire in your life.

When you get this?  Aaahhh, then you begin to understand your power, your strength, your love, your abilities, in a whole new way.