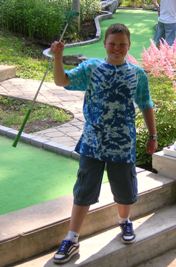 Several years ago, I was attending a nephew’s wedding, and the day before the wedding, his younger brother suggested we go play miniature golf.  Unbeknownst to me, my brother, Steve, often played miniature golf with his family, while I had played it perhaps five times in the past 20 years.  So, we all went out to this beautiful course, and began to play.

Well, let me tell you, it wasn’t long before some old childhood competition began to arise in me. Steve is older than me and used to “cream” me at numerous games we played together.  (To this day, I won’t play Monopoly!)  🙂

By the third hole, my score was waaaayyyy over what I would have liked it to be.  While Steve was playing quite nicely at this golf course, I was about 3 – 5 strokes over par each hole. AARRRGGHHH!!! While I knew it was just a game, I really didn’t like making a fool of myself.

After I finished hitting the ball all over the third hole, I remembered to tap.  Hmmm, now I had a dilemma.  As you know, tapping looks a bit strange, and I was not about to openly tap while standing there in the middle of the golf course!  Not happenin’!

So, I decided to tap on myself in my head. Since it wasn’t my turn, I took a deep breath, closed my eyes, andimagined myself tapping on the points, while saying to myself all the feelings I was feeling:

Even though I’m feeling frustrated at how I’m playing, it’s ok … It’s just a game, and it’s just for fun…

Even though I really want to do better, and I haven’t been, I think I can, if I just relax a little bit…

Even though I’m feeling like a bit of a fool here, hitting the ball all over the place, it’s ok.  It’s just a game. It really will be fine, no matter what happens…

I continued on to tap in my imagination on whatever feelings I could come up with.

At the very end of the game,I was the only one who hit the ball into the almost impossible shot(a hole in one! at the “19th hole”) to win a free game.  I proudly handed the coupon to Steve, and said “Yes!” in my heart!

The lessons from this?

2.      It doesn’t matter where you are, you can relieve your negative feelings gently and easily.

3.      Once you relieve those feelings, you are in a very different place of creation with the Universe.  You are able to create from a space of allowing, rather than resistance.

1.      If you get into a situation where you are unable to tap (a meeting, at the dinner table with friends or family, whatever), just take a deep breath in and imagine tapping on yourself regardless of what your feelings are at that moment.  Just acknowledge them, and tap them away.  This is the key point here:recognize your negative feelings as they occur, and do something about them,rather than just allowing them to stay blocked inside.

2.      Notice how differently you feel after you tap.  Notice what things seem to “change” around you.  Notice how you are different.  Notice how others respond to you.  You will be astonished if you just pay attention.

Let me say one caveat about step 2 above.  Most of the time, we don’t pay attention to what happens after we tap.  And because we have moved into a new space of being, we then forget how we felt before, and how life was occurring for us before the tapping.  Sometimes the change is so subtle, we truly don’t recognize the difference.

However,if you will pay attention,you will notice the changes in both yourself and in the way you interact with the world.  And you will be astonished!  Promise!